What Types of Jobs Is an Excavator Used For? 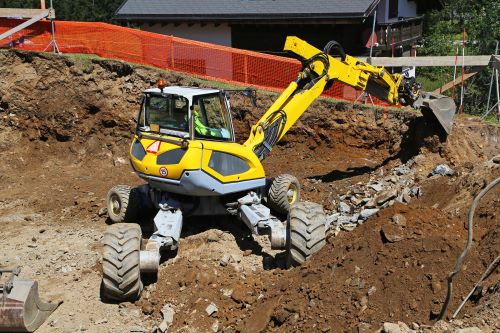 When most people think of popular construction site equipment, machines like bulldozers or large cranes often come to mind. Their versatility and ability to complete large tasks leaves a lasting impression on construction workers and pedestrians alike. But there is another machine that’s extremely versatile and is used on a large majority of construction sites, and that’s an excavator.

An excavator consists of a boom, a stick, a bucket, and a cab. This cab, which sits on a rotating platform known as the “house,” features a set of tracks beneath it. These tracks allow the cab to move to wherever it needs to go. Excavators can work on countless jobsites, as they offer unique abilities to carry out specific tasks. A small excavator can fit through narrow passageways to get to its target, while larger excavators can weigh more than 45-metric tons and move earth like nothing you’ve seen before. And most excavators can access different attachments that make it able to do even more jobs than it was originally created for. When it comes to excavators, there’s not much they can’t do.

If you want to have a job using an excavator, you have to become certified to operate one. When you attend a training school like West Coast Training, you get hands-on experience using a variety of excavators as well as in-class training that teaches you how to use them safely and effectively. Having the skill set to master this machine can open countless job opportunities for you in the future. Here are just a few of the jobs that excavators can be used for.

Mining is a popular job that uses excavators on-site. Hydraulic excavators specifically are a great machine to use to dig and pull material to its destination. These machines are large, giving them the ability to move material in bulk, which is necessary on a mining site. It also provides you with the option to rotate a full 360 degrees, giving them easier options for transportation on-site.

On a mining site, the excavator moves soil away so that workers have easier access to the material they’re mining. It quickens the process tremendously. The excavators often come in the form of backhoes or bucket wheel excavators, and they can move large amounts of soil in a short amount of time. The excavator’s digging ability is unmatched, which is why mining is one of many jobs it’s suitable for.

When trying to remove material from natural environments, like forests, excavators can come in handy. Though some machinery isn’t able to handle the narrow and often uneven terrain that you find in nature, specific excavators, such as spider excavators, are able to complete the job. Uneven or rocky terrain is no issue for the spider excavator, as its undercarriage doesn’t feature the typical tracks other excavators do. Spider excavators have legs that allow it to imitate walking as it maneuvers through unleveled or rocky ground.

With additional attachments to excavators, you can assist in brush cutting and forestry mulching jobs. This is a great option for people who need things like land clearing done in preparation for tree harvesting or to prepare for a build-site. The size of an excavator makes it an ideal choice when working with large material such as tall trees and natural obstacles.

Most construction sites don’t begin as leveled pieces of land. They often start with buildings on them, uneven land, cement, or a variety of other obstacles. For this reason, demolition is a key factor in many construction plans, and excavators are a perfect machine to get that work done.

An excavator’s job on a demolition site can vary. Armed with a concrete breaker attachment, they can be the perfect solution for breaking up streets, sidewalks, and other large pieces of material. This creates smaller pieces that can be easily handled by other equipment and taken off of the site. Demolition is an important part of most construction, and an excavator makes an easy job of breaking down large material.

In areas that get a lot of snow in the winter, having proper plowing equipment is essential. Unplowed streets result in hazards for drivers or roads that are impassable. Excavators are a great resource for these types of jobs and are often used by city workers to clear snow for a community.

In this situation, the attachments that can be used with an excavator are very convenient. In this case, a special blade attachment can be attached to mini excavators, giving them the ability to properly plow snow, while also reaping the benefits of its small size. A mini excavator is able to move more quickly than a standard excavator, which is of great importance when trying to clear snow and make roads usable again.

When you want something added onto your property, like a pool or a new driveway, an excavator will probably be used. Home property improvements and additions are known to need smaller excavators to get the work done. These types of jobs are always springing up as homeowners find new ways to use their land.

Road maintenance is one way that construction companies improve homes, and they usually use wheeled excavators to do so. These smaller excavators have great mobility, which allows them to move faster and work in tighter areas than larger excavators. Other excavators work well on these types of jobs because they can dig ditches and clear them of debris in preparation for a pool to be installed.

These are just a few of the wide variety of jobs that an excavator is used on. Being professionally trained to use one will make you an asset on any construction site. Schooling with this machine, as well as many others, can be done at a heavy equipment training school like West Coast Training. Students from around the world come to West Coast Training for the in-depth learning experience and the on-site training they can use as practice. If you’re interested in starting a new career where you work with excavators or other heavy machinery, a heavy equipment training school may be the right choice for you.