What Is a Scraper Used for in Construction? 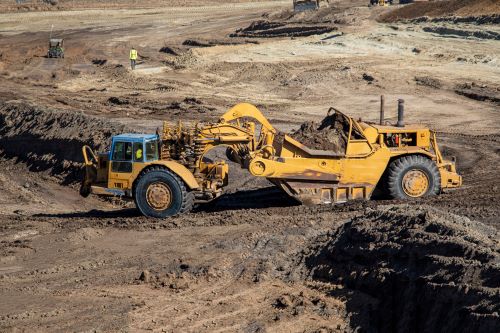 You might be familiar with some of the heavy equipment you’ll find on any job site: for instance, it’s pretty obvious what a bulldozer is designed for. But scrapers look a little different, and it may not be apparent what they’re set up to handle or even what they’re used for. What is a scraper? And what is it used for in construction?

What Is a Scraper?

First, you might want to know what it looks like. A scraper has a cab in front where the driver operates the vehicle. Behind it, the scraper pulls a vertically moveable hopper, which is sometimes known as the bowl. It has a sharp blade on its horizontal front edge. When the hopper is lowered, that sharp edge cuts into the soil or clay below it, and the material fills that hopper. Once the hopper is full, the scraper can go deposit its load at the fill site.

Scraper operators are in high demand because using this one machine, an operator can dig, load, haul, and dump all at once, whereas previously, it could take as many as three separate machines to do the same amount of work. In fact, developers can save as much as 30 percent in fuel consumption on job sites.

What Is It Used for in Construction?

Usually, a scraper is used on construction sites as earthmovers, but they are also used in mining operations, agriculture, and other earthmoving applications, such as preparing an area for grading. The fact that it has a heavy-duty blade and can remove its own gathered waste material makes it essential to large earthmoving operations. Another advantage is that it can move wet soil or earth, as opposed to other machines that can only move dry materials. It’s actually better at moving wet earth, so it’s a highly efficient machine to use (especially in the Pacific Northwest). This saves contractors a lot of time waiting for dryer conditions as well.

There are a few different types of scrapers. The most common is the single-engine wheeled scraper. It’s one of your jobsite’s most versatile machines because each of the parts within it uses hydraulics, which means they can all function separately. A dual-engine wheeled scraper works best for cut-and-fill tasks for especially narrow construction sites. One engine controls the front wheels, and the other controls the rear wheels.

An elevating scraper can either use electric or hydraulic power to drive the elevator. Wheeled scrapers rely on their apron to control the load inside of them, but the elevating scraper can dump the material through the backward sliding of its floor. Lastly, a pull-type scraper is best to use when moving sandy or soft terrain. This one is not motorized and can be towed behind other machines you may already have on-site.

If you’re looking for an education you can use to build a lifelong career in construction, look no further than West Coast Training. We are NCCCO-certified and provide small classes so you get the personal attention you need for full training. Contact us today about becoming a heavy equipment operator.