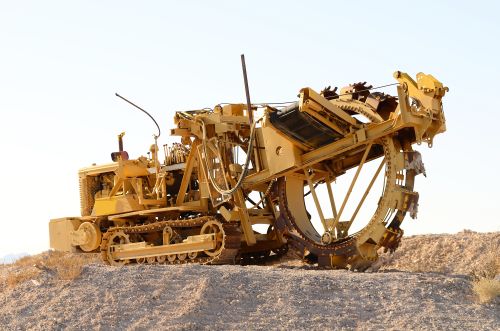 What Big Equipment Can I Learn to Drive in Heavy Equipment Training?

If you’re interested in a career in construction, there are numerous different pieces of big equipment that will be used in a variety of projects. No matter the size of the project, big equipment is very useful. This equipment makes construction projects easier and faster.

Because this equipment is so large and heavy, you need to have the best training before you drive any of them. Here at West Coast Training, we’ll give you all the tools you need to start driving big equipment. Our Heavy Equipment Training course includes hands-on experience, as well as additional training on important skills and knowledge. Read on below to find out more about the big equipment you’ll learn to drive.

Backhoes, also known as backhoe loaders, are widely used and have multiple purposes. They’re used for moving dirt, digging holes and trenches, lifting materials, backfilling excavations, and placing materials such as pipes. The hoe arrangement is on the backside, which is how this piece of big equipment gets its name. This equipment is driven by wheels. It can be used in urban areas and can even be driven to a site. It’s also especially useful for construction in smaller areas.

Excavators are very important in construction and are impressive big equipment. They’re used for a wide range of projects. While excavation is the most common, some of their other uses include heavy lifting, demolishing buildings, cutting down trees in forests, handling materials, rough grading, brush cutting, and river dredging.

They have a long arm and a pivoting cab that can be rotated a full 360 degrees. This makes it easy to access hard-to-reach places. The cab where the operator sits also provides great visibility. Part of the reason why they’re so versatile is because they can also be fitted with different attachments for different jobs. There are two different main types of excavators, meaning they can be driven by either tracks or wheels. Typically, tracks are used most often, and they’re considered to be the easier and more efficient option.

Bulldozers are big soil excavating equipment. They’re frequently used for lifting soil, removing weak soil, and removing rock strata. The sharp-edged, wide, flat metal plate at the front is what removes the soil or other materials. This plate can be raised and lowered by hydraulic pistons. Bulldozers are considered one of the most reliable of the big construction equipment. They’re incredibly strong and heavy vehicles.

Because of the bulldozer’s strength, it can also be used to crush boulders. The wide tracks also gives this vehicle good traction, even in rough conditions such as sand and mud.

Motor graders are another highly versatile piece of equipment that can be used for fine grading and moving dirt. They’re often used in the construction of roads, and their main purpose is to level soil. They can fine grade dirt or gravel in order to prepare for laying an asphalt layer. Graders have a long horizontal blade that can be adjusted to different angles. This blade is located between the front and rear wheels. A second blade can be added to the front axle. Graders can also remove snow and dirt from roads. And they can sometimes be used for underground mining.

Scrapers can move dirt around the construction site. This equipment is mostly used for digging and leveling land. Scrapers can easily move large amounts of material throughout a site. They’re usually used in open areas, where they have the space to move around and can be driven more quickly. Scrapers include a hopper that cuts into the ground with a sharp edge. Hydraulics are used to raise and lower the hopper. The larger scrapers are called motor scrapers. There are also pull scrapers, which are smaller equipment.

This equipment is used for loading materials such as asphalt, rock, soil, and construction waste onto other pieces of equipment, such as dumpers and trucks, so they can be easily moved throughout a site. Loaders include a large bucket and a short moving arm.

This piece of large equipment is, as the name implies, primarily used to dig trenches. The trenches can be quite narrow—usually used for laying pipelines and cable. Trenchers are somewhat similar to excavators, but unlike excavators, trenchers remove soil in one continuous movement. This equipment comes in many different varieties, including different sizes. The larger-sized trenches can cut into hard surfaces, including asphalt pavement.

If any of these pieces of equipment interest you, consider West Coast Training’s Heavy Equipment Operator course. It’s 8 weeks and ultimately gives you 400 hours of experience with the big equipment. During this course, you’ll also learn related duties, such as preventative maintenance and site preparation, plus skills including basic civil engineering, workplace safety, and basic surveying.

Our instructors have top-level experience and expertise. The smaller class sizes in our training programs ensure that you get as much attention as you need. And in addition to classroom time, we have hands-on training in the field, which is the best way to learn. The training doesn’t stop after you graduate either. We also hold seminars and refresher.

Our program includes postgraduate services, such as resume and job interview preparation. You can find out more on our website. We also have an online quiz if you’re still unsure whether becoming a heavy equipment operator is right for you. Once you decide to take our course, you’ll soon be driving big equipment for a living!