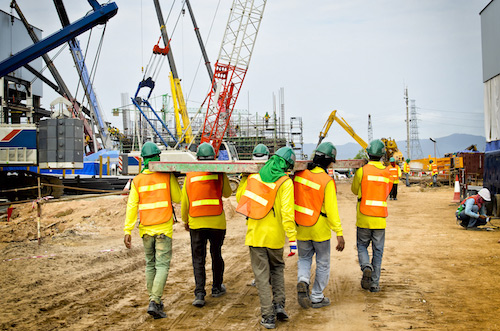 The construction industry is rapidly growing and changing. To better understand the current state of the field it is important to look at some of the major data points available and how those aspects are making a significant impact.

The following is a closer look at the current labor shortage, the changing age of the workforce, spending, technological growth, and how all this data relates to a growing industry.

A topic often debated between those working in construction and those analyzing the industry is whether or not there is a real labor shortage. Regardless of which side one may fall on, there are some interesting facts around the topic.

The issue is a nationwide one. Contractors in areas such as Houston, which was battered by Hurricane Harvey last year, have struggled to staff up, and the National Association of Home Builders recently found that 82 percent of its members believe the cost and availability of labor are their biggest issues. In 2011, only 13 percent named labor costs as the biggest worry.

Even with tax reform and regulatory rollback increasing optimism—many firms predict more business and new hires in 2018, according to a survey by the Associated General Contractors of America—builders and developers are wondering where they’ll find more skilled labor.

With the U.S adding roughly 210,000 new construction jobs in 2017, according to the Bureau of Labor Statistics, and currently experiencing low unemployment, the industry’s growth keeps it from getting ahead of rising demand for workers.

However, while Job Opening and Labor Turnover Survey data show a decline in hiring rates, the decline is not dramatic and puts hiring rates essentially where they were in mid-2013.

If the economy has managed to add a million construction jobs since then at this gross hiring rate, that means the current hiring rate is consistent with healthy net job growth, making training like crane school a viable option for those looking to start a new career in construction.

Counter to the Job Opening and Labor Turnover Survey, there is evidence that ever since the recession, more than 1.5 million residential construction workers have left the industry and fewer than half of those workers have come back. This is making it difficult and more expensive for homebuilders to staff up, leading to a much older workforce.

In construction, a higher percentage of the industry’s workforce is in a few of the “working age” groups, primarily from 35 to 54. Employment from these age groups accounts for 49.1 percent of employment in the industry, whereas that proportion is significantly smaller for the workforce as a whole (41.4 percent).

There are also fewer workers proportionally from the younger end of the spectrum. In 2016, just 10.2 percent of workers in construction were under 25 years old, compared to 15.0 percent in all industries.

However, from 2012 to 2016, there was a shift. The proportion of construction workers under 25 was previously 7.9 percent in 2012, meaning it has increased by 2.4 percentage points over those four years.

Additionally, the percentage of workers 55 years and older also increased over this time, from 16.5 to 19.6 percent. As the industry slowly gains more workers on the high and low end of the age spectrum, it starts to get closer to the age composition of the overall workforce.

A data point of high importance is spending within the construction market. Trending Economics looked at market spending from 1964-2018. The research revealed some interesting tidbits about comparative spending in 2018:

With trends that seem to be going in a positive direction, those looking to take advantage of the market and become a skilled worker in the construction industry have options like crane school, where the skills needed to be a marketable job candidate can be acquired.

Construction, as an industry (including companies focusing on the commercial retail sector), has traditionally been reluctant to embrace technological change. But those days are ending.

Indeed, the industry is ripe for disruption, and according to the McKinsey Global Institute report, “Reinventing Construction Through a Productivity Revolution,” adopting new technology to increase the construction sector’s productivity growth by only 1.8% could increase its market value by $1.6 trillion.

There is currently a huge labor shortage in the construction industry, so tech companies are stepping in to make sure that projects continue to be completed on time by streamlining management processes and enabling closer collaboration among team members.

The skilled construction labor pool still has not recovered 11 years after the housing market crash began. As of August 2017, more than 70% of construction firms are still having trouble recruiting for hourly craft labor positions, according to the Associated General Contractors of America.

The end result of the labor problems? Project managers must achieve the greatest results from the least effort, and technology is providing a way.

How can cloud-based computing benefit the industry? One easily adoptable option is cloud-based construction monitoring software, which can run on a range of smartphones and mobile devices, as well as desktop computers and laptops.

This software could allow project managers to easily share and communicate on blueprints, reports, safety issues, contracts, weather delays, and the myriad of data points during a project’s lifecycle.

For instance, if a company uses project management software that allows the quick and easy filing of daily reports, construction superintendents and foremen can step away from inefficient pen-and-paper methods. A cloud-based software solution allows them to update reports from the job site, which gives project managers immediate insights into the daily operations of the project.

There is a lot of new information about the construction industry and while some of the data may seem contradictory to one another, there is definitely evidence that the industry is growing rapidly in numerous areas, and doesn’t look like it will be slowing down any time soon.